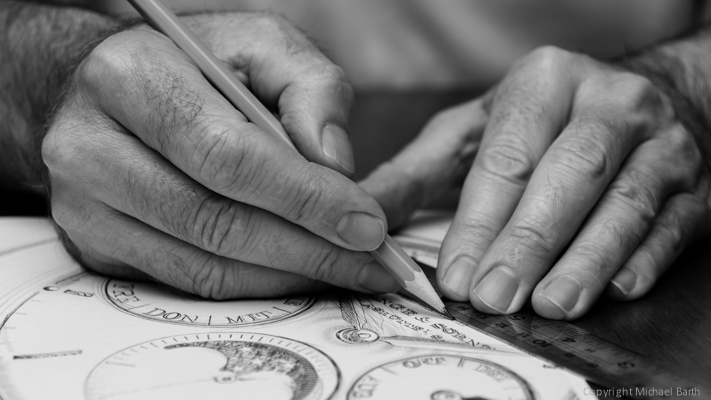 Hands at Work was the theme for one of the Pakenham Camera Club's monthly competitions. The image also needed to be monochrome so after some head scratching I came up with this image which is of my own hands doing some drawing/drafting.

Despite the seemingly simple subject, it actually turned out to be somewhat of a challenge to have my hands in the correct position for focus and focal plane as well as shape....yes shape. A hand model I am not and to have your hands in a position that looks, well, nice is the best word I can come up with right now, apparently takes some practice. Then there was achieving the desired depth of field as well as leading lines. No big deal you say! Well try doing it all using the 10 second timer on your shutter AND have to recompose yourself after every shot. Anyway, if at first you don't succeed, keep trying, it's a digital camera after all so all it's costing you is time.

The image achieved a 2nd Place B Grade in our monthly competition as well as Highly Commended EDPI Novice in the Pakwick 2015 interclub competition between Pakenham Camera Club and Berwick Viewfinders Camera Club.