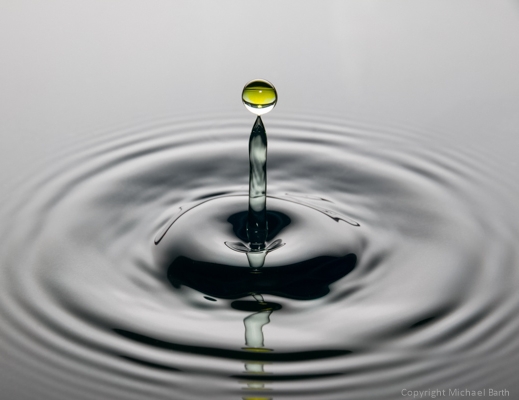 iDrop actually preceded "A Drop in Time" which I posted earlier, but used the same techniques to capture the image. Many people on seeing this image think that a second water drop is falling onto the splash from the previous water drop. In reality it is the result of a single water drop after it has hit the water surface and rebounds, it is just that our eyes can't see these things happen due to the speed at which this takes place.

If you go to the Gallery and view this image, you may notice that the EXIF data is reporting the camera settings as f8.0 with 1/200th shutter speed, however if you try to capture water drops yourself, you will soon learn that 1/200th is not nearly fast enough to freeze the action and get a sharp image. This is where the flash comes into it........What's that you say, how can the flash help when the shutter is still open for 1/200th of a second? Don't I need to have a faster shutter speed like 1/1000th or maybe that thing I heard about called high speed sync? That was my thought too, but that won't work. Firstly, increasing your shutter speed beyond the cameras flash sync speed, which is typically somewhere around 1/180th or 1/200th of a second, will result in portions of your image being black. If you use high speed sync on your flash, this actually fires the flash multiple times in rapid succession in order to avoid the problem I just described, but this wont achieve the desired results in this instance.

The secret sauce is knowing how your flash behaves at different power settings. At full power, an off camera flash like a Canon Speedlight 580ex will provide a flash of light that lasts for approx 1/250th of second. Turn down the power though and this changes dramatically. At half power the flash of light only lasts 1/919th of a second (nearly 1/1000th) and at 1/4 power we're already at better than 1/2000th of a second. So how do we use this knowledge? Turn down the ambient light (make the room dark) so that to expose your image the light is substantially coming from the flash and since the flash is only providing that light for the duration you choose, eg. 1/919th of a second, you can freeze the action very nicely indeed. If you are interested in flash duration tests at different power levels, you can visit this website or others like it: gock.net/2012/01/flash-durations-small-strobes/

This image achieved a Highly Commended C Grade in our clubs monthly competition.