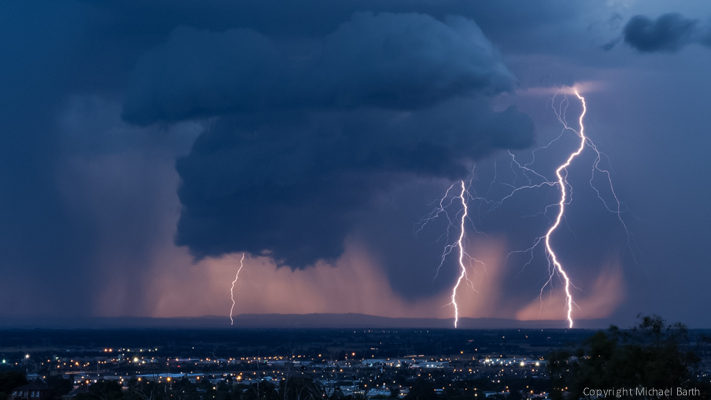 Gods Fury was taken while a huge thunderstorm passed Pakenham to the south over French Island. A group of us had gathered on the top of a hill in a new subdivision which provided excellent views south and east of Pakenham. Using a tripod to keep the camera steady, I closed down my aperture to f14 which had the desired effect increasing depth of field, but more importantly it extended my shutter times to about 5 seconds to start with, ending with about 15-20 seconds as sunset approached. Next I set the camera to continuous shooting and using my remote shutter release, locked the shutter button down. The camera was now taking long exposures one after another.

Why did I do this you may ask?  I knew that lightning was very bright so even the brief instant the lightning bolt was visible was enough for the cameras sensor to capture it. By leaving the shutter open, I completely eliminated the need to try and press the shutter when lightning occurred, a near impossibility I think you'll agree.....and by having the shutter button locked down, it meant that pretty much any lightning that was to be seen was going to be captured by my camera.

This image achieved 2nd Place B Grade in our clubs monthly competition.